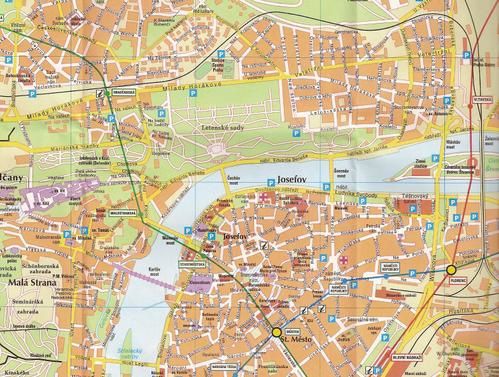 The largest undeveloped area in Prague shows in its development a fascinating reflection of the transformations of the territory that thanks to its sharp terrain edge above the river competes with the most important territory units in Prague - Prague Castle, Vyehrad and Vítkov. It is so distinct in the Prague skyline that already in the days that in no way can be characterised with any extreme romanticism and respect for beauties of nature, i.e. short after 1900, the natural character of its slopes constituted an obstacle for the "fatal" decision concerning the construction of a road from the city towards the north. Tenders of this type, where the road "Parízská - Svatopluka Cecha bridge - north" is solved, do not appear after 1918. The idea of a tunnel had not been abandoned but it was moved further away from the historic centre. Contemplations to break through in this part might seem to be unrealistic and utopian if finished drawings showing this version were not preserved.

The territory itself is called Letenská Plain; philologically it is a name with certain "poetic" content - from the geographic point of view the place could also be called flatland, plateau, tableland etc.

A name that is not limited strictly only to geographic or orographic understanding makes us contemplate whether even in this case "the town did no feel" an analogy for example to the territory behind the town walls in Paris (compare Paris et sa banlieue, Michelin Paris 1972, p. 54 : ..il n'y a que champs et marais... En 1667, Le Nôtre prolonge la perspective des Tuileries; toute la plaine, appelée Grand Cours, est plantée de rangées d'arbres. Ces calmes ombrages prennent, en 1709, le nom de Champs-Élysées). Like in Paris, the spectacular town planning axis in Munich (Ludwigstraße) and in Berlin is also completed with a triumphal arc. These parallels with certain spiritual content - Elysian Fields, or content marking military victories in modern European towns (in connection to strong ancient Greek and Roman traditions), are naturally only meant at totally general level. Prague's Letná, with its history of military exercises, could rather be compared to Parisian "Champs-de-Mars" or to Munich's Maxmilian Platz around the year 1800 and later to the territory to the north of it, which was not developed with regard to military exercises and parades until the time of construction of contemporary Pinakothek der Moderne (2004). Prague also had large exercising ground in today's Karlín, where also the "Parisian" Invalidovna was established in the 18th century. Why this territory was later "devaluated as regards its content" is already outside the scope of this contemplation.

I dare to make these vague comparisons because the contemporary town-planning thinking has receded due to the cold-headed financial calculations (price per square meter of the land) from the ideas that were at the basis of the most important town-planning principles of pre-consumption Europe . Unfortunately to emphasise certain idea importance of the place we paradoxically get most of the arguments from the recent period - construction of the biggest statue of Stalin and existence of military parades, which as we known, for example in Paris are held on the Elysian Fields. Anyway, "the prestige of a place" is a term that is difficult to prove by means of exact argumentation. Whereas the construction of the state gallery at the western edge of the plain was probably prevented mainly by the oncoming war (the building permission was issued on November 25, 1937), then we can assume that filling of the huge area totally with government buildings, buildings of central offices, buildings for schools and for residential purposes was probably prevented by certain timidity when facing such an imposing territory. Both the huge sports stadium and the cubist halls of residence, that were once standing on the plain, were constructions of completely "reversible" character. During the first republic thus this territory was only defined on its eastern edge by the Ministry of Interior and both museums. These are constructions that can be labelled as "ostentatiously monumental" although their placing in front of the natural "border" constructions of Holesovice was a certain sight devaluation of the older development (e.g. Fialka's neo-renaissance water station from 1888 hidden behind Havlícek's "juggernaut building", from which only its beautiful arcade gallery "sticks out").

The last methodical comment concerns the change of Letná formation as regards its context.

Whereas until the first half of the 19th century it was a territory right behind the fortification wall (extra muros) and like in other Baroque fortresses it was necessary to keep this area free, "unutilised", the situation changed radically at the moment when the plain started to be surrounded with continuous development of new Prague quarters (Holesovice from the 1880s, somewhat later Bubenec and Dejvice). Letná was not a periphery any more and it became a free area inside the city. Town gardens are often called poetically as the "lungs of the town" - however, Letná due to its large area helped to give Prague a "dimension" of a city that Prague was gradually turning to. History of the place and brief history of construction activities.

The analysis of Letná as a place of construction activity is not intended as exact description and assessment of the individual buildings from the point of view of history of architecture and as regards tenders as an analysis of the performance of the individual authors and "analogical" assessment of the work of commissions of that time - it is rather intended as an outline of ideas that this territory aroused in various generations of architects and investors.

Until the second half of the 17th century, the only construction activities can be seen in the belt of Baroque fortification walls with bastions constructed near the edge of the Letná slope. Around the year 1715, inside one of the bastions, on the axis of today's Revolucní trída avenue, Count Valdstejn had a single-storey manor built with an attic semi-storey and with characteristic terraced material formation.

This territory probably belonged to the Valdstejn family already from the times of Albrecht from Valdstejn about whose construction activities in the area of Buben court we are informed. However, the appearance of the folly and its name "Belvedere" we only know from a period engraving - probably it was not fully destroyed by the French army in 1743 (because it is drawn in later plans of Prague) but its structural condition perhaps was not so good to be able to be used without problems during the construction of another building in roughly the same place - i.e. Ullmann's neo-renaissance manor from the year 1863. It is interesting that the construction following chronologically - Hanavský pavilion from the Jubilee Exhibition, which was transferred here in 1898, due to its roof formation (and thus also its silhouette that was with regard to the prevailing views from the south of the city the most important architectonic feature) resembles the baroque manor Belvedere.

In the years 1908 - 1911, on the western edge of Letná Bedrich Ohmann built a manor house for Karel Kramár - nowadays the residence of the Prime Minister of the Czech Republic that again dominates the very edge of Letenská Plain towards the city centre. In the meantime the wooden sports stadium oriented perpendicularly to the longitudinal axis of Letná was probably built.¨ The halls of residence built in cubist style by architect Vanecek in 1922 on the western edge of Letná should have been a makeshift for several years but they were used until 1960s. In the 20th century there were several tenders concerning the territory of Letná . In 1908 it was a ender for communication interconnection of the Parízská trída avenue under construction over the Svatopluka Cecha bridge to the northern parts of Prague . To put it in a simplified way - the intention was to build either a cutting or a tunnel that would get the traffic up to Letná. The tenders thus concerned rather the southern slope of Letná than Letná "en gros". However, these projects already suggested possible development on the plain along the road, or better to say at the place where it comes to Letná.

There were more tenders in the 1920s and they were focused on the need of the new republic to gain appropriate buildings for ministries and central offices. As an example of certain functionalist harmonisation of the area can be seen in Krejcar's design from 1928 with twelve identical buildings from which the easternmost one was built later as the Ministry of Interior. However, also Janák's design from 1929 can be seen along similar lines. Janák's studies were always based on the emphasis of the importance of a generous solution of roads, as it is mentioned in his theoretical work - his design resembles, especially in its western part, a monumentally solved crossroad of boulevards rather than quiet residential blocks.

The last important event was a preparation of the construction of the Czechoslovak State Gallery with the entrance from Badeniho Street in the 1930s - the Gocár's design would probably reach as far as nowadays turn point of trams and buses, as the actual building block of the gallery had dimensions of more than 100 x 100 m. We also have to include the forefront of approximately the same size as the built-up area (figure 28) and later also the mass of so-called Masaryk's Institute was added to it, that was, however, solved at the expense of this forefront, which damaged significantly the "monumentality of the design". An interesting solution is included in Gocár's design towards Letenská Plain - a monumental colonnade with slim pillars was probably intended to perform certain optical interconnection with the huge "empty area" of Letná. Letná or Leten was mentioned as early as in the 11th century. In 1261 there was a coronation ceremony of Premysl Otakar II and in 1420 it was a camp of Zikmund's army before the defeat at Vítkov hill. The gardens on Letná were planted in 1858, when Letná and its slopes were bought by Prague Community, and later it was adjusted by F. Thomayer around the year 1890. The large area, later called Letenská Plain, stretched from the hilltop above the Vltava river northward towards the road leading from Buben village to Strahovská brána (today's Milady Horákové avenue). It was a military exercising ground until the late 1880s when playgrounds, gymnastic and sports grounds started to be established here.

At the turn of the century, in connection with demolition of former Jewish Ghetto between the Old Town and the Vltava river and the construction of a new quarter in its place, an idea appeared to connect Letenská Plain downwards to Prague by means of a cutting (architect Jan Koula) or a tunnel (architect Richard Klenka from Vlastimil).

In 1920 a Prague planning committee was established and tenders were announced basically concerning town planning of Prague . From designs for Letná which were supposed to solve government buildings and where the problem with Letná cutting or road appeared again, nothing was implemented.

Czech town planning started to develop with the formation of Greater Prague. Its construction and redevelopment in the new scale was supposed to be harmonised by means of so-called regulation plans.

In the years 1936-1938 an extensive wall of uniformly solved residential apartment buildings in accordance with the design by Josef Havlícek was built at the eastern part of Letenská Plain along Milady Horákové avenue and in the same time at the edge of the plain along Nad stolou street a complex of buildings of the Ministry of Interior was built by Kamil Roskot (in cooperation with Jaromír Krejcar and Jan Zázvorka). Not far from the south-east edge of Letenská Plain a symmetric composition of Agricultural Museum and National Technical Museum was finally built in the years 1938 to 1941 in accordance with the design by Milan Babuska. It was the beginning of the development of Letenská Plain from the east, which did not have a bad architectonic outcome but it significantly complicated the construction of Letenský tunnel after the World War II.

The construction of National Gallery was discussed for twenty years (Gocár's design of the construction at the western edge of Letná has never been implemented).